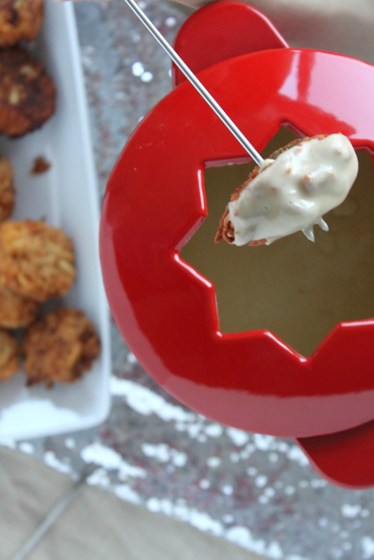 Rub inside of a large saucepan with cut sides of garlic. Finely grate garlic into saucepan; add beer and 1/2 cup of wine and bring to a boil over medium heat. Whisk cornstarch and remaining 1/4 cup wine in a small bowl until no lumps remain, then whisk into liquid in saucepan. Bring to a boil, whisking constantly, then reduce heat so mixture is at a very low simmer and very gradually add Gruyère, Swiss or Edam and Mini Ball Cheese, whisking until smooth (fully incorporate each batch of cheese before adding more).

Whisk bourbon and baking soda in a small bowl to combine, then whisk into fondue, followed by lemon juice; season with salt. Transfer to a fondue pot. 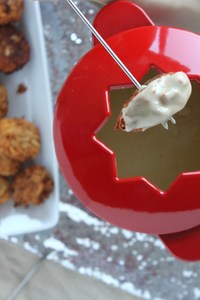 Whitney Fisch received her Master’s Degree in Social Work from the University of Michigan and is currently working as The Director of Counseling at Milken Community Schools’ Upper School Campus in Los Angeles, CA. When not dealing with the trials and tribulations of roughly 600 high schoolers, she is at home dealing with the trials and tribulations of her3 young children as well as cooking… a lot. She blogs about all things food and life on her blog, http://jewhungrytheblog.com/. Jewhungry was a Top 5 finalist in 2013 for The Kitchn’s Homie Awards for Best Health & Diet blog and in 2014, Whitney co-authored a Passover e-cookbook that same year with fellow Jewish foodbloggers, Amy Kritzer, Sarah Lasry and Liz Reuven called, “4 Bloggers Dish: Passover – Modern Twists on Traditional Recipes”. Whitney contributed recipes and blog posts to Interfaithfamily.com, The Huffington Post, and The Nosher. You can follow Whitney’s adventures on Instagram at @jewhungry or via her Facebook page at www.facebook.com/jewhungry

No Peel No Squeezing No Mess Latkes by Alison Gutwaks | @alibabka 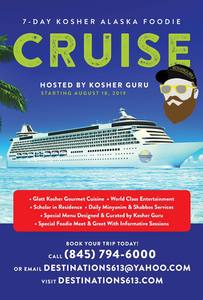